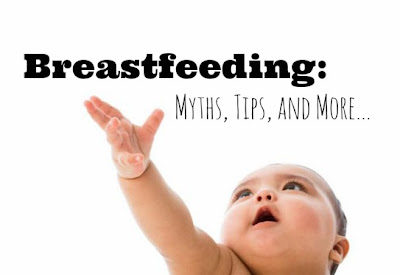 I've been wanting to do a post on breastfeeding for a long time. It's hard work, there's a lot of area to cover! But in this I aim to present you with all the facts. The myths about breastfeeding you may believe, especially those that can hinder nursing or stop it altogether, tips to a more successful journey, physical issues that can inhibit it, the "nursing in public" issue, modesty, and much more.

This is part one of The Crunchy Mama's series on breastfeeding!

I always knew I wanted to breastfeed. It was something I grew up knowing, even though I was formula fed nearly from the start. I knew it was the most natural, normal way, and I knew it was incomparable, even before I began my reading about it. And when I got pregnant, I knew without a shadow of a doubt I would breastfeed my babe.

Some women begin producing colostrum (liquid gold, its the good stuff!) while still in pregnancy, I did around 17 weeks. When my daughter was born, we did immediate skin-to-skin contact, and tried feeding within the hour. It wasn't easy though. She latched on quickly, but not properly, and being a tired newborn quickly fell asleep. She slept a lot. My mother in law worried at the time, and because I was a brand new mom I worried too. She didn't eat a lot, and my milk hadn't come in yet, and I was freaked out.

{As I've come to learn, this is fairly normal, especially for shoulder dystocia babies like mine. The birth process is incredibly wearing and they are exhausted! While emotions run high in pregnancy, birth, and parenting, remember not to read into everything. Some babies latch on soon, are alert or hungry right away, and some aren't.}

My in-laws, bless their hearts, were freaked out enough to run to the store for bottles and formula. But this scared me. I knew the catastrophic cycle that could come from offering a bottle of formula... nipple confusion and preference, trouble latching on to the mother's nipple and frustration at the slower flow, leading to a frustrated mom and another bottle... and so on and so forth until the breastfeeding journey is forfeited.

{One thing we have to remember, is breastfeeding is an art, one that must be learned by mother and child.}

So my midwife kindly offered to try wet nursing, to see if our issue was latching or just a really sleepy baby.

Bree didn't take the breast, or the bottle of formula for that matter. As my milk hadn't come in yet, I pumped colostrum and droppered into my daughter's mouth (a great alternative if the baby isn't taking the breast yet and you don't want to offer a bottle). Colostrum is much thicker and denser than just breastmilk, and can be harder to come out, which is why many moms struggle in the first few days, waiting for their milk to come in. But it is the PERFECT first food for your baby, and the strength needed to suckle for it is great preparation for your baby to learn how to eat.

Luckily three days after giving birth my milk came in. I drank tons of fluids and mother's milk tea and was engorged! It was hard getting my tiny little one latched on to my veryyyy full breast, but we did it! It took us around seven weeks to fully get the hang of it, and still struggled on occasion. We discovered later on that the reason behind this was an upper lip tie (we will discuss lip and tongue ties in another part of this series), and we pushed through and have a successful breastfeeding relationship despite it, nearly ten months in.

My reason for telling you my story is this: Breastfeeding can be easy for some, and very difficult for others. But it is totally worth it to push through the circumstances if you can and not give up! There are sooo many wonderful benefits to mother and child from breastfeeding, and that is what we will be discussing next.

Dr. Sears states 7 ways breastfeeding benefits moms, although I believe there are countless benefits. Let's read some, straight from his website:


{Let me just say that the "child spacing" benefit, does not work for everyone. My period returned the week after my post partum bleeding stopped. While in many cases, full exclusive breastfeeding will delay the return of fertility, it is not a guaranteed means of birth control. I breastfed exclusively without introducing a pacifier until my babe was 2 months old, nursed on demand, and through the night and it did not work for me.} 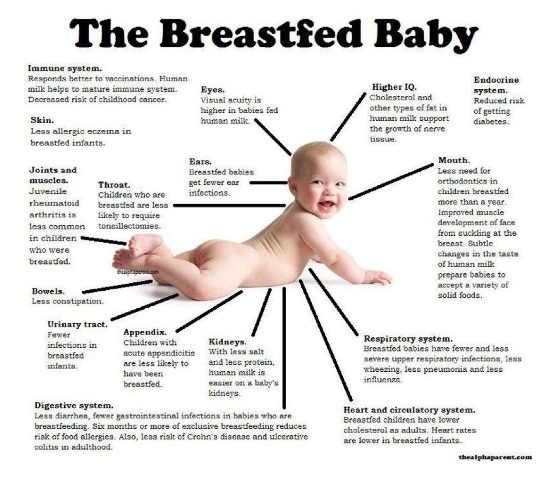 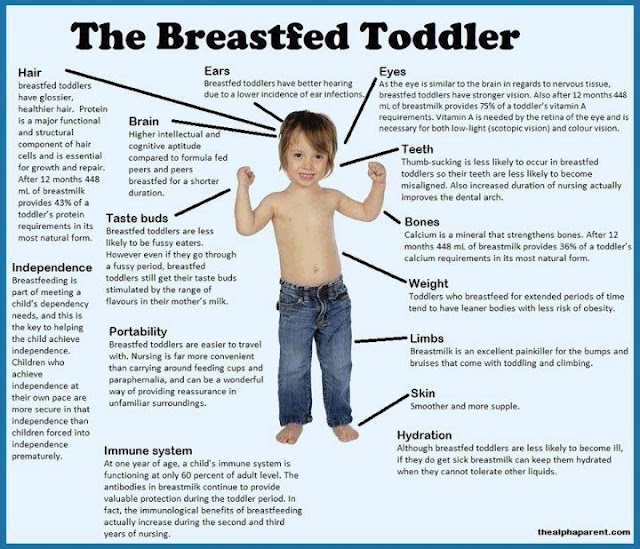 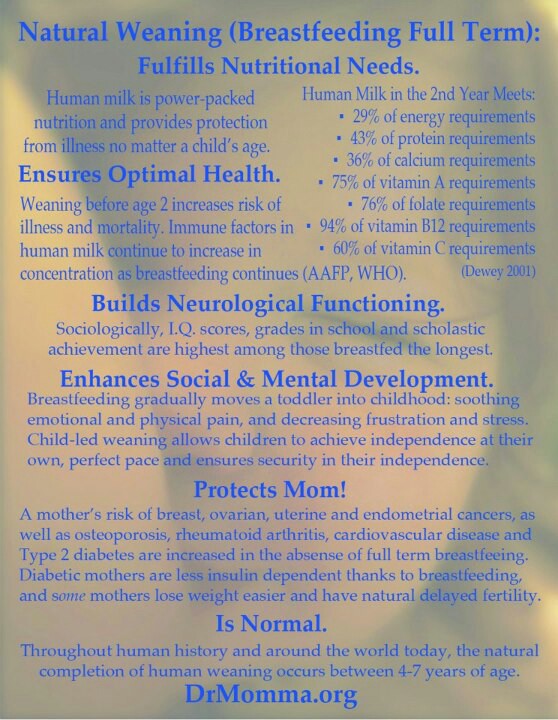 The benefits for baby are innumerable. Stronger immune system, great brain development and function..... the list is huge and long.

Check this link out, directly from Dr. Sears again! Benefits for babies from breastfeeding:

"The study showed that the exclusively breastfed group had the fastest growth in myelinated white matter of the three groups, with the increase in white matter volume becoming substantial by age 2. The group fed both breastmilk and formula had more growth than the exclusively formula-fed group, but less than the breastmilk-only group." 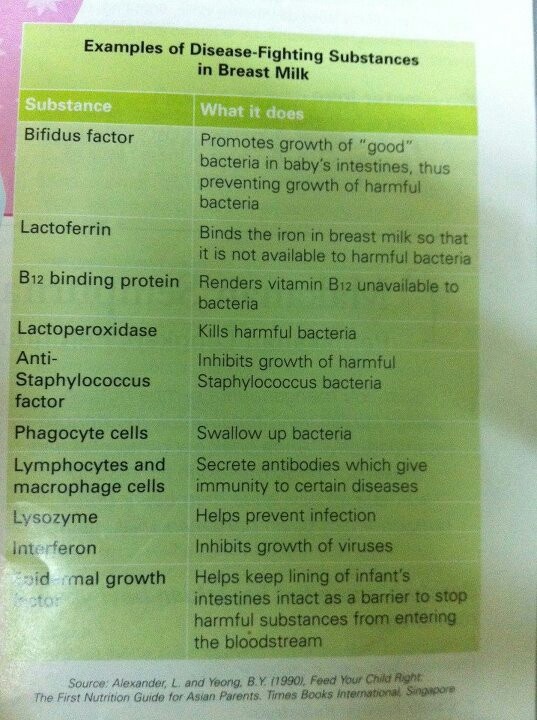 Babycenter tells us "Your breast milk is specifically tailored to your baby. Your body responds to pathogens (virus and bacteria) that are in your body and makes secretory IgA that's specific to those pathogens, creating protection for your baby based on whatever you're exposed to. Breastfeeding's protection against illness lasts beyond your baby's breastfeeding stage, too. Studies have shown that breastfeeding can reduce a child's risk of developing certain childhood cancers. Scientists don't know exactly how breast milk reduces the risk, but they think antibodies in breast milk may give a baby's immune system a boost.

Breastfeeding may also help children avoid a host of diseases that strike later in life, such as type 1 and type 2 diabetes, high cholesterol, and inflammatory bowel disease. In fact, preemies given breast milk as babies are less likely to have high blood pressure by the time they're teenagers.

For babies who aren't breastfed, researchers have documented a link between lack of breastfeeding and later development of Crohn's disease and ulcerative colitis..."
Check out the link to read more!

Another fabulous source for breastfeeding is evidence-based parenting website KellyMom, where there are a TON of resources and articles regarding breastfeeding, Birth Without Fear, and of course, Dr. Sears.

Obviously there are many benefits to breastfeeding, and I hope you learned something new today! Part 2 of the breastfeeding series coming soon! 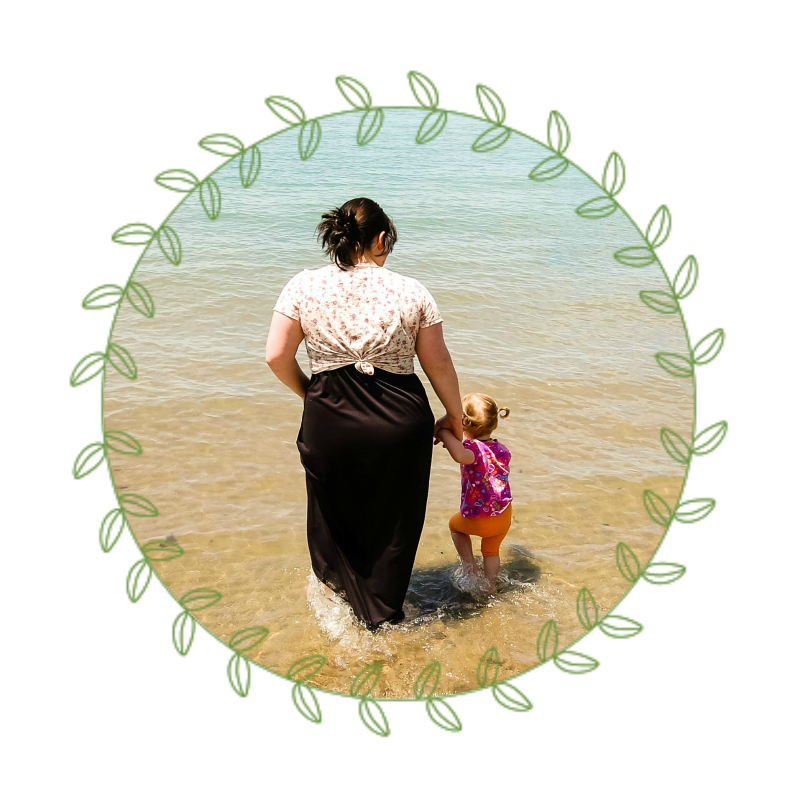 I am the mother to a beautiful baby girl, born at home and drug free, I am wife to a loving and supportive husband, and this blog is about our adventures through life! To learn more about us, click the "About Me" tab above!